Observations of an Independent Holiday Traveller…Part 1 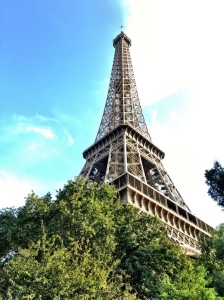 Au contraire to many opinions, the independent traveller still exists!

To start, airports & tourist attractions…
Airports and tourist attractions are littered with flag waving tour guides, whether in Barcelona, Paris or Vienna. The various modes of identifications of a tour guide for his flock are hilarious, – flags, colourful hats, selfie sticks, whistles with high-pitched sounding scary tones, megaphones, (yes, they still exist) and many more…
It’s the European summer so mass tourism is at its peak and as an individual traveller you feel almost forgotten. Ticket queues for everything are long and if you haven’t pre-ordered, pre-booked or become part of a group you either miss out or spend endless hours waiting in a line watching the herds walking past you.

At a visit to a major shopping mall in Barcelona announcements were in Spanish (or Catalan) and Mandarin Chinese, but not in French or English…. however, I did also note that Barcelona still has a shortage of Chinese restaurants or eateries – an observation made when I felt like some good old fashioned Hokkien noodles with seafood, perhaps a new market opportunity for some Chinese culinary entrepreneurs.

Tourist attractions were inundated with tour groups and resembled human beehives with a queen bee leading the way.
Having said all of that, I really want to talk about hotels and how they treat their guests, comparing the group tourist to the individual traveller.

In my 40 years or of travel I have stayed at my fair share of fancy hotels, home stays and backpacker accommodation. I must admit that some of my most memorable encounters were had in backpacker accommodation… 🙂
With increasing age of course, comfort takes a priority and a stay at a hotel of my choice must now first and foremost have a reputation for good beds, cleanliness and a decent bathroom, not to mention some type of adequate room service.

It would be normal for the above to be a basic expectation at each establishment, with a degree of finesse added for each additional star the hotel claims to possess. Europe has so many ‘4 star’ hotels that wouldn’t make the grade anywhere else in the world. Any property with a ‘half good’ name or brand seems to give itself ‘5 stars’ irrespective of the shape, size and comfort of the room and ancillary facilities. I noted some ‘5 star’ hotels in Paris with 18 sqm rooms and no space for a suitcase, but they certainly manage to charge 5 star rates!

In my choice of hotels, I mostly tried to stay in individual properties that did not have the chain logo emblazoned across everything.

My stay in Barcelona was at a 4-star independent property with no room service or restaurant on site, with the exception of breakfast served. There were no groups in sight at this property, despite the sizeable number of rooms. The rooms themselves were original, exceptionally well designed and had all the modern comforts, including free WiFi, iPhone charger, safe, mini bar, premium coffee machine etc.

Next stop was Paris where I decided to give the ‘’chain’’ a go and ended up in the centre of city with an internationally recognised name. Well, here the group tourist was King of the Castle. Whilst I paid a premium for my room (noted after checking out the various hotel sites) I was offered an upgrade by the hotel for a mere 10 Euro in order to have access to a Nespresso machine, a free mini bar with 4 soft drinks and a bottle of water and a bathrobe (of course not forgetting the slippers :)).
After my coffee experience in Spain I couldn’t refuse the Nespresso offer; who needs a bathrobe and slippers? Each to their own I guess…
The room was well laid out, practical, clean, with a very comfortable bed and surprisingly efficient air conditioning system.… On the negative side, paper cups were supplied for the Nespresso coffee machine (yes, cheap paper cups you couldn’t touch with hot coffee in them!) and plastic cups for the mini-bar beverages – all that is supposed to be 4-star standard these days in Paris apparently…

With breakfast included in my room price, on the first morning I marched to the hotel café only to find myself surrounded by groups of Italians tourists who completely took over the space. So here I was in the midst of the chaos struggling to make myself known to staff standing at the door in the desperate hope of getting a bite of breakfast! More irksome was perhaps the thought that they were most likely only paying half the price I was…

Hoteliers really should know how to manage these groups better in order that the dining experience is not spoilt for individual travellers, or for that matter the groups, as these negative experiences are surely damaging to their reputation long term. There are plenty of options that a skilled hotelier can take to resolve these matters (and I’m not talking access to club lounges, etc.), although perhaps labour has been cut back so far that there was no skilled hotelier at the helm? Maybe hotel chains should look into premium economy travellers, a category between back of the plane and business class….

Not everyone feels comfortable staying in luxury hotels while on holidays (travelling in shorts and t-shirt). Where are the properties that have both some service and the comfort of good quality accommodation?

I left the international hotel scene for a week and proceeded to Bad Ischl, a small spa town near Salzburg for some spa pampering…

The hotel here was part of a majestically restored villa with rooms added in a new wing, claiming ‘4-star superior’ standards. They actually did deliver what could be said to be an above average room, fitted out with all the mod cons expected.
What was even more surprising were the spa facilities; clean, exceptionally well designed and laid out; the property was built for one and only one purpose – to ensure guests felt pampered… To my surprise every conceivable sauna option was available, not to mention an indoor pool with every thinkable water treatment facility. One could have spent the entire day just going from one to another in-between culinary refreshments coming from a kitchen that had been given the coveted ‘Green Hat’ meaning that you not only had to cook ‘green’ but also prove that you shopped your produce from a green source.

The Austrians take their hats very serious and it was reflected in the menu with the kcal count for each dish and some of the finest food I had eaten in a while.

The hotel guests included Japanese, Americans and many different European nationalities, but no group tourists!
This was traditional Austrian hospitality in the countryside; staff that were ‘original’ and ‘innocent’ who provided a backdrop to what turned out to be an excellent choice for a week of pampering of body, mind and soul.

Onward to my next stop, Vienna. I was back in the big city with big hotels and big prices…
For sentimental reasons I stayed at a hotel that I happened to work in some 40 years ago. It still is there with the same small cave like rooms, good smelling bed linen and a doorbell that knocks off your socks!
This was a ‘grand old dame’ of international hotels. It was the first international hotel in the city of Vienna in the early 60’s and it had retained its charm and old Viennese aura – assuming you ignore the café to which some designer had given a ‘hip’ and modern make over which left it a complete mismatch to the rest of the property.
While still a market leader, this now well-established hotel shows evidence that it has been reworked a few times over the years, not always necessarily to its benefit…continues.