The incongruous idea of abandoned hotels…

The past 40 years has seen unprecedented growth in tourism and business travel, resulting in the development of thousands of hotels and resorts in all parts of the globe. Even in times of economic difficulties new hotels continue to pop up somewhere in the world…

So when you hear about once great and luxurious hotels that have been abandoned it seems somewhat incongruous. Of course, each has its own history and story to tell, whether closure is because of financial problems, changing market trends or a war or environmental disaster. Here are some interesting examples…

The Hachjio Royal Hotel was once the largest hotel in Japan. Situated in Hachijo-jima in the Izu Islands, the destination was originally promoted as the ‘Hawaii of Japan’ by the government, in times that overseas travel was a rarity. Time eventually took its toll and with increased international travel the destination fell out of favour and as a result the once grand, and now named Hachijo Oriental Resort, closed its doors forever in 2005…

Construction for this 5 star 200 room property and golf course was started in 1990, but was never finished.  Construction ended abruptly when the project ran out of money, after it was 80% completed, when approx. $36 million dollars disappeared. Rumours abound regarding curses , corruption and mafia links, but the Cook Island government was guarantor for the development and it is said to have nearly bankrupted the country- apparently they are still paying the interest on the property. The property has changed hands a few times and was put up for sale again in 2016 by the New Zealand owner. 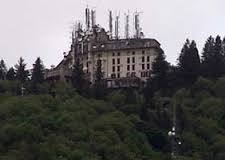 This grand hotel was at the forefront of a tourism boom in Varse, Italy for many years, and has drawn many comparisons with the movie “The Grand Budapest Hotel”. It opened in 1912 and this art nouveau-styled hotel was brimming with elite guests in its early years. Adding to the air of luxury, the property was accessible largely by a funicular railway. Eventually cable cars from Milan, Como, Lake Maggiore, and even from neighbouring Switzerland would lead to the glamorous hotel. Although business was interrupted by two world wars, and a fire on the top floor in 1947, the death knell was the closure of the railway in 1957 and business steadily declined until its eventual closure in 1968. Despite a number of attempts to reopen the property it remains in ruins, although hopes are that a 2016 sale will eventually lead to a restoration and a return to its former glory…

The Grand Hotel in Beira, Mozambique opened in 1955 to great fanfare, heralded as a luxurious gateway for the elite of Africa. The opulent, art deco style resort featured gleaming chandeliers, lavish rooms and ornate décor, with stunning views to the Indian Ocean. However, the hotel closed after only 8 years, with the owners considering it to be too costly and unprofitable to keep open. When civil war broke out in the country the hotel was abandoned. The hotel was used as a refugee camp for a time, and now it is home to more than 3000 squatters who call the once grand hotel home. Gone are the trappings of wealth and privilege, and women do their washing in the area that was once an Olympic sized swimming pool…

← Is poor etiquette killing your job chances?
Is your job under threat from a robot? →